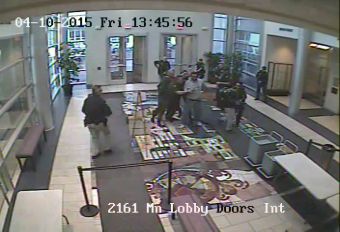 Sheriff Chuck Allen commended the actions of the Deputies who were faced with a highly volatile situation in a busy public setting.

“These situations can be very difficult for law enforcement to resolve without the use of lethal force,” Sheriff Allen said. “In this case Deputies saw the opportunity to successfully initiate a non-lethal tactic using a TASER. They acted with split-second determination to safely free the victim and take the suspect into custody.”

At approximately 1:45 p.m. on Friday, April 10, 2015, suspect Jeff Douglas Wise, age 41, abducted a bystander at knifepoint just outside the courthouse at 1 South Sierra Street. Wise then entered the lobby of the court building holding the adult male victim at knifepoint. Court Security officers and a Reno Justice Court Bailiff initially confronted the suspect while calling for assistance from Sheriff’s Deputies.

Deputies arrived within moments and ordered the suspect to drop his knife. The suspect refused. As Deputies positioned themselves around the suspect, they saw an opportunity to deploy a TASER. Once hit by the TASER darts, the suspect released the victim. Deputies were immediately able to pull the victim to safety while taking the suspect into custody.

After Wise was taken into custody he told investigators that his intent was to try to force Deputies into a lethal force situation. He is currently being held in the Washoe County Detention Facility on charges of Assault, Second Degree Kidnapping, Assault on a Protected Person and Disturbing the Peace in a Public Building.