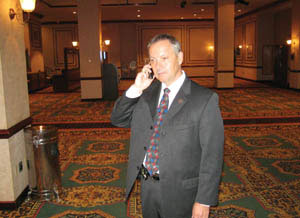 At a banquet in a downtown hotel, Washoe County Sheriff Mike Haley stepped out to make a call.
Photo by Dennis Myers For members of the public, the thought when they hear about fewer police on the street is likely for the safety of themselves and family members. But it also means that the jobs of those officers who remain after budget cuts become more dangerous.

“I think what happens a lot in policing is … as calls for service come out—and depending on the number of bodies there are to handle those, depending on the priority of call—they’ll either wait longer in the hopper, if you will, and receive no response until such time that we have someone available,” said Washoe sheriff’s Sgt. Don Gil, a leader in the Washoe County Sheriff Deputies Association. “Or if it’s a higher priority call, and there’s a lot of those stacked up, usually what you’ll see is sometimes officers will maybe put themselves out there in situations that they should avoid. Obviously, we don’t encourage that. We want, you know, a minimum of two officers to our highest priority calls. But sometimes they’re waiting for some time for that second officer to get there.”

Among Washoe sheriff’s deputies, there is a morale problem as a result of more of those kinds of calls.

Last month, when the Washoe County Commission was about to adopt its new budget, Deputies Association president Tim Ross issued a statement saying that “deep cuts to the Sheriff’s Office budget and other law enforcement programs have significantly reduced personnel and resources devoted to public safety. Among other things, Washoe County employs less than one patrol officer for every 1,000 residents. The Western regional average is nearly double that figure.”

Figures released by the county at the Feb. 14 Washoe County Commission show that in the 2005-2006 budget, 30.5 percent of county spending went to public safety. In 2011-2012 that figure was up to 37.8 percent, according to that staff report, which has aroused disbelief among the deputies.

“And then, here in 2011 they show 1,079 employees,” Gil said. “I can certainly tell you from my vantage point at the sheriff’s office, none of those employees came there. And we’ve actually [gone] down. I believe we lost 23 positions over the course of the last year or year and a half of attrition, people who retired and have not been replaced. We haven’t hired a new deputy sheriff in probably a couple of years.”

The pressure of policing in a recession has made the workforce at the Washoe County Sheriff’s Department feel aggrieved and receptive to suspicion. Many of them are convinced that the county has redefined what constitutes “public safety” in order to keep the numbers up.

For instance, rumors have circulated that five positions in flood control and additional spending at the Jan Evans Juvenile Justice Center have been brought under the public safety label. However, the Washoe County Sheriff Deputies Association has not been able to firmly nail down whether this has, in fact, happened.

“I guess if there’s a flood it would be a danger to the public, but I think it skews the public’s opinion of, are they really safer?” Gil said. “Like I said, when I hear public safety and when others hear public safety, they assume boots on the ground, police officers in the field. I don’t know how accurate, and I’m not sure how many people the county has moved in to that bigger umbrella of public safety.”

When informed of the deputies’ skepticism, County Commissioner Kitty Jung said that early in the recession, to deal with agencies trying to get themselves under the public safety rubric, the Commission made a policy decision on how “public safety” would be defined, and she has assumed it was followed by the county staff.

“I do remember when I first got to the commission, the one thing that we had made a policy decision was that public safety would be cut the least,” Jung said. “And then, everybody’s suddenly public safety, right? Parks and recreation could make an argument that if you don’t have clean parks, then the public isn’t safe. So we operationally defined it as, when you call 911, who shows up?”

Sheriff Mike Haley was cautious about claiming the numbers have been juggled.

“I don’t have any evidence that loosely described public safety projects are being pushed into our budget, like flood control,” he said. “I don’t have personal evidence, and quite frankly, it’s a very complicated environment. … To me it’s [public safety] police and firefighters on the street.”

He said the new budget is not to his liking, but county officials have a difficult task in a time of anemic revenues.

“I think in any budget challenge that we have, everything has to do with compromise. The county has particular policies and budget approaches they’ve taken and that’s their prerogative. … The county has a right to make the decision. I don’t have to agree with that decision, and I don’t agree with it this time.”

At our request, County Manager Katy Simon reviewed the 2006-2012 budgets to see if the definition of public safety spending had changed during that time. In an email message, she said it has not:

“We reviewed all the adopted and final amended budgets, and there are no significant changes that would materially change the numbers from 05/06 to 11/12, except that when the final amended budget for 11/12 was filed, the change for Public Safety was from 30.5 percent of the General Fund in 2005/6 to 36.8 percent in 2011/12, vs. the 37.8 percent in 11/12 you had from previous reports.” (The 37.8 percent figure, again, originated with a county staff report provided to the county commissioners.)

Haley said he knows people in his department feel ground down, and he worries about the effect.

“I just had a retreat today, starting with the captains and lieutenants and then we’ll move to the sergeants and then to the deputies,” he said. “The morale is high, but the frustration with pay and benefits is weighing on them and distracting them from their jobs. … They are tired and overworked and lots of times doing multiple jobs. … The deputies’ pay is not adequate. Given any comparison of agencies of like size, the pay of our deputies is last in line. It’s a complex subject. They ought to be frustrated and they have a right to be frustrated.”

Sheriff’s deputies are feeling a good deal of unease, and so are their families. One spouse said, “I keep reading that our population is going down. That’s the best news I’ve heard, because it means less crime and fewer situations … that deputies get into.”